According to Akamai they deliver 20% of internet traffic so when a big event happens they know about it. In the last 24 hours Barack Obama became the President of the United States. 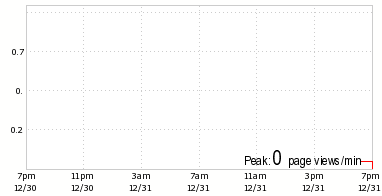 With 5.4 Million visitors per minute it makes this the 5th highest ranked news event. What is surprising is the events that hold positions 1 to 4.

The data and the graph above comes from http://www.akamai.com/html/technology/nui/news/index.html

There is no such thing as bad publicity except your own obituary.

This is surely what Cummins Nitro and Naked Communications are telling their clients. These agencies  are the ones behind the IslandReefJob and Man in the Jacket.

Both of these have now had bad press this week revolving around fake videos. Tourism Queensland have apologised for causing confusion and last night we got a video from “Heidi Clarke” coming clean on the hoax. See it here.

So, is it true, is there no such thing as bad publicity?

Commentators seem to point out that “the man in the jacket” may not have worked the way it was originally intended but it did succeed in getting the brand name in the media. I would bet a large amount of money that hit on their web site have grown as well. Question is, will anyone now go and buy the jacket?

OK enough is enough. Australian ad agencies need to understand that just setting up a website and posting videos on YouTube isn’t going to get you a loyal following of customers. MySpace, Facebook, or Twitter aren’t going to help you either. The audience on these sites are not just going to believe whatever is put in front of them. Pretend to be something you’re not and unless you are very, very, very good you are going to get found out.

This brings me to the “are you my man in the jacket?” attempt at viral marketing. All the features of a campaign that would have worked 2 or 3 years ago are there but the audience has matured and evolved and this was quickly tagged as fake.

The suspect in this case is Witchery, a clothing company here in Australia. More discussion on this attempt can be found here, here, and here.

Wouldn’t it be nice if she finds her man in time for Valentines day.

Looks like I wasn’t the only one who noticed the less than perfect launch of www.islandreefjob.com. The Age had an article the same day about how the site was unable to cope with the number of hits.

This week the site is working and is now getting publicity but not for the reasons they had hoped. First comes the accusation of discrimination against vision-impaired users, the site does not cater for their needs.

It was also revealed this week that one of the videos listed as a applicant for the job is actually a fake – in 2 ways. The video showed a girl calling herself Tegan getting a tattoo of the Great Barrier Reef on her arm. YouTube users were onto the first part of the fake immediately, the tattoo had none of the redness of a real tattoo. I think that part can be excused, the video was original even if the subject wasn’t scared for life.

However the next revelation is less acceptable. It appears  that “Tegan” is not a genuine application. She works for the ad agency that created the campaign! Her video has now been removed but you can check out the other videos on YouTube.

As we saw last week even the big internet aware companies sometimes struggle with the traffic and hype that a new site can create.

Now in this case it was Microsoft and the site was the Windows7 beta, the main Windows7 site remained operational but the page to sign up and the 2.5Gb and 3.5Gb iso images were a little on the slow side and even at one point completely unavailable.

What happens when an Australian state government launches a $1.7 million tourism campaign? Would you want to a least look at a website that offers a dream job living on a tropical island for 6 months and getting paid for it?

The Queensland government here in Australia has posted job ads in media all over the world looking for someone to live on Hamilton island for 6 months. The successful candidate will have to blog and use other internet services to talk about their experiences.

You might think that since that if the candidate is a success then the site they create will get a lot of traffic and therefore the people running the marketing campaign might have some scalable infrastructure behind their site. Well it seems they don’t, since launch the site has mostly been unavailable or incredibly slow.

It looks like they have used http://www.aussiehq.com.au/ for the hosting and the server is based in Melbourne and doing a reverse IP lookup shows that islandreefjob.com is the  only site on the IP address, so I guess that is better than a shared host. Looking at the details for the dedicated hosting packages it shows the the port speed is only 10Mbit, since they want people to send in videos as part of the application process, hmm looks like someone didn’t really think this through.

Who do you think sat in the meeting and said “Sure we’ve got $1.7 million to spend but lets just go with the cheap hosting and save the rest for the end of year Christmas party”

I get lots of great ideas. Sometimes I do nothing with them, sometimes I get motivated enough to actually try and get them off the ground.

Over the holidays I was off to a friends wedding at a place I’d never been to before. They were nice enough to include the Melway reference on the invitation but our TomTom GPS doesn’t understand Melway references so we had to manually enter the address, it doesn’t take long but is still a bit fiddly and can be prone to errors when suburbs collide.

If only there was a human readable easy to enter code for a latitude and longitude like the G-Code system that was popular on VCRs in the 90’s. (just looked in my Sunday TV guide, looks like people must still use it!)

The solution would be pretty straight forward, just encode the two numbers as a base 16 number (hexadecimal). That should be easy to enter and would shorten the numbers somewhat. If I used more letters than just A to F then I could shorten the codes further. I would have to leave out letters like “I” and “O” as they could be confused with 1 and 0. I thought this over in my head for the full half hour the drive took then forgot about it was the wedding started and I enjoyed the day with my friends.

About a week later the thought came back to me but this time I was within reach of a computer. First I had better check that it didn’t already exist, onto Wikipedia and a bit of clicking later I cam across Geohash. Yes, it already exists, has since Feb 2008 which isn’t really that long.

You then get a nice ULR to your address http://geohash.org/r1r2f63rrw741

Now we just need the GPS makers to get on board with the idea!

As I mentioned earlier I’ve been playing with Windows 7, I also just download a legit version for the 64bit edition from Microsoft, you can too from http://www.microsoft.com/windows/windows-7/beta-download.aspx

Something that I stumbled upon when clicking around in the menus was the Math Editor. I wish I had this back in my Uni days, you can see a quick review at http://www.gottabemobile.com/2008/10/29/windows-7-math-input-panel-screenshots/

Basically it turns your scratchy math equations into nicely formatted equations. Now if this is compatible with a symbolic solver like MatLab then this will be a very nice tool for more than just reports.

One thing I liked at MacWorld from Apple was the new version of iPhoto. Are Apple and Google competing for digital asset management supremacy? Google releases a version of Picasa for Mac that would have been an improvement over the old iPhoto. The next day Apple announce a new version of iPhoto that takes it to the next level.

Face recognition, Geo-tagging, linked to social networks. Now they have face recognition how long till they include other objects like buildings, cars, and animals? What if this information is shared with search engines? How about Photosynth, what if it grabs all the photos tagged with a location. What if you (or the friends you share images with) have images of that location over a number of years? A small slider at the bottom on the screen allows you to see the view change over time… make that into a video and now you’ve got a screen saver I’d like to have.

Although it was rumored that Apple would release a new Mac Mini (and an iPhone Nano) when I got up this morning and checked Engadget all I go was a 17" Mac Book.

Where is the new Mac Mini!!! Think they might put a Dual Core Atom in it? A SSD? Have it all run on 20 Watts of power. Green computing at it’s best. They better hurry up or I’ll have to build my own, Intel make a nice motherboard with the 330 onboard.

No posts for a while. I was lost somewhere. Now it is 2009. See how long it takes this year until I get too busy to post.